Following the previous post in the series about WPE where we talked about the WPE components, this post will explain briefly the WPE graphics architecture, and how the engine is able to render HTML content into the display. If you haven’t read the previous entries in this blog post series about WPE, we recommend you to start with the first post in the series for an introduction, and then come back to this.

As the document is parsed, it will begin building the DOM tree and load-blocking CSS resources. At some point, possibly before the entire DOM tree is built, it’s time to draw things on the screen. The first step to render the content of a page is to perform what’s called the attachment, which is merging the DOM tree with the CSS rules, in order to create the RenderTree. This RenderTree is a collection of RenderObjects, structured into a tree, and each of these RenderObjects represent the elements in the DOM tree that have visual output. RenderObjects have the capability to render the associated DOM tree node into a surface by using the GraphicsContext class (in the case of WPE, this GraphicsContext uses Cairo to perform the rendering).

Once the RenderTree is created, the layout is performed, ensuring that each of the RenderObjects have their proper size and position set.

It would be possible to render the content of the web page just traversing this RenderTree and painting each of the RenderObjects, but there would be problems when rendering elements that overlap each other, because the order of the elements in the RenderTree doesn’t necessarily match the order in which they must be painted in order to get the appropriate result. For example, an element with a big z-index value should be painted last, no matter its position in the RenderTree.

This is an example of how some HTML content is translated into the RenderTree (there are some RenderObjects missing here that are not relevant for the explanation).

In order to ensure that the elements of the RenderTree are rendered in the appropriate order, the concept of RenderLayer is added. A RenderLayer represents a layer in the document containing some elements that have to be rendered at the same depth (even though this is not exactly the case, you can think of each RenderLayer as a group of RenderObjects that are at a certain z-index). Each RenderObject is associated to a RenderLayer either directly or indirectly via an ancestor RenderObject.

There are several conditions that can decide whether a RenderLayer is needed for some element, it doesn’t necessarily needs to be due to the usage of z-index. It can be required due to transparency, CSS filters, overflow, transformations, and so on.

Continuing with the example, these are RenderLayers that we would get for that HTML code: 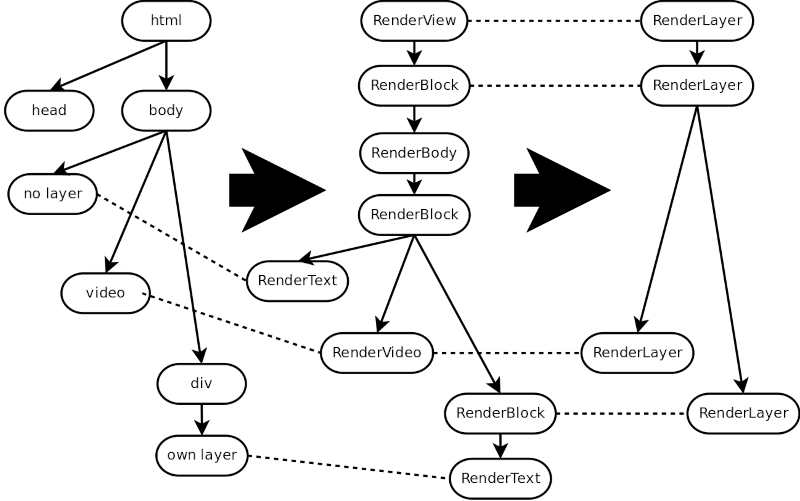 We can see that there are four RenderLayers:

RenderLayers have a paint method that is able to paint all the RenderObjects associated to the layer into a GraphicsContext (as mentioned, WPE uses Cairo for this). As in the previous case, it’s possible to paint the content of the page at this point just by traversing the RenderLayer tree and requesting the RenderLayers to paint their content, but in this case the result will be the correct one. Actually this is what WebKitGTK does when it’s run with accelerated compositing disabled.

This would be much more efficient if the content that doesn’t change was somehow separated from the content that’s changing, and we could render those two types of content separately. This is where the composition stage comes into action.

The idea here is that we’re going to paint the RenderLayer contents into intermediate buffers, and then compose those buffers one on top of the other to get the final result. This last step is what we call composition. And it fixes the problems we mentioned with animations of transparency: animations don’t require repainting several RenderLayers. Actually moving an element just means painting one buffer with an offset during the composition. And for transparency, we just need to perform the new blending of the two buffers during the composition, but the RenderLayers of the content below the translucent element don’t need to be repainted.

Once we have the RenderLayer tree, we could just paint each RenderLayer in its own buffer in order to perform the composition. But this would be a waste of memory, as not every RenderLayer needs a buffer. We introduce here a new component, the GraphicsLayer.

This is how the example code would be translated into GraphicsLayers.

We can see that we have now three GraphicsLayers:

With this structure, now we can render the intermediate buffers of the RenderView and the transformed RenderBlock, and we don’t need to update them any more. For each frame, those buffers will be composited together with the RenderVideo buffer. This RenderVideo will be updating its buffer whenever a new video frame arrives, but it won’t affect the content of the other GraphicsLayers.

There’s something else that be done in order to increase the rendering performance, and it’s using the GPU to perform the composition. The GPU is highly optimized to perform operations like the buffer composition that we need to do, as well as handle 3D transforms, blending, etc. We just need to upload the buffers into textures and let the GPU handle the required operations. WPE does this though the usage of the EGL and GLES2 graphics APIs. In order to perform the composition, EGL is used to create a GLES2 EGLContext. Using that context, the intermediate buffers are uploaded to textures, and then those textures are positioned and composited according to their appropriate positions. This leverages the GPU for the composition work, leaving the CPU free to perform other tasks.

This is why this step is called accelerated compositing.

Until this point, all the steps that are needed to render the content of the page are performed in the main thread. This means that while the main thread is rendering and compositing, it’s not able to perform other tasks, like run JS code.

WPE improves this by using a parallel thread whose only mission is to perform the composition. You can think of it as a thread that runs a loop that composites the incoming buffers using the GPU when there’s content to render. This is what we call threaded accelerated compositing.

This is specially useful when there’s a video or an animation running on the page:

It would take another post to explain in detail how the threaded accelerated composition is implemented on WPE, but if you’re curious about it, know that WPE uses an specialization of the GraphicsLayer called CoordinatedGraphicsLayer in order to implement this. You can use that as an starting point.

So this is the whole process that’s performed in WPE in order to display the content of a page. We hope it’s useful!

At Igalia we’re constantly evolving and improving WPE, and have ongoing efforts to improve the graphics architecture as well. Besides small optimizations and refactors here and there, the most important goals that we have are:

But what about the backends?

In the previous post there was a mention of backends that are used to integrate with the underlying platform. How is this relevant to the graphics architecture?

Backends have several missions when it comes to communicate with the platform, but regarding graphics, they have two functions to achieve:

The most common example of this is a Wayland backend, which provides a buffer to WPE for rendering. When WPE has finished rendering the content, it notifies the backend, which sends the buffer to the Wayland compositor, and notifies back to WPE when the frame has been displayed.

So, whatever platform you want to run WPE on, you need to have a backend providing at least these capabilities.

This was a brief overview of how WPE rendering works, and also what are the major improvements we’re trying to achieve at Igalia. We’re constantly putting in a lot of work to keep WPE the best web engine available for embedded devices.

If this post got you interested in collaborating with WPE development, or you are in need of a web engine to run on your embedded device, feel free to contact us. We’ll be pleased to help!

We also have open positions at the WebKit team at Igalia. If you’re motivated by this field and you’re interested in developing your career around it, you can apply here!

This article was written by Miguel Gómez.

Miguel has been contributing to WebKit and WPE for almost ten years now, focusing specially on the graphics part of the code.